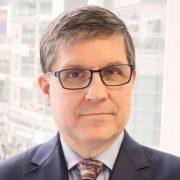 Dr. David McKeown is the Associate Chief Medical Officer of Health for the province of Ontario, with responsibility for supporting the provincial covid-19 response. He is a physician specialist who has worked in the public health field for over 30 years. From 2004-2016 he led Toronto Public Health, Canada’s largest local public health agency, serving a diverse population of 2.7 million people. He has also served as the Medical Officer of Health for East York, the Region of Peel, and the former City of Toronto prior to municipal amalgamation. Dr. McKeown led the local public health response to the H1N1 pandemic, a major outbreak of Legionnaire’s Disease, and the first outbreak of West Nile Virus in Canada.

Dr. McKeown holds a medical degree from McGill University, a Master’s degree in Community Health and Epidemiology from the University of Toronto, and is Assistant Professor (adjunct) at the Dalla Lana School of Public Health at the University of Toronto. He is a Fellow in Public Health and Preventive Medicine of the Royal College of Physicians and Surgeons of Canada and a certificant of the American College of Preventive Medicine.