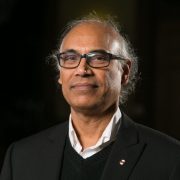 Kumar Murty is the Director of the Fields Institute for Research in Mathematical Sciences, a position he has held since July 2019. He received his doctorate from Harvard University in 1982. From 1982 to 1987 he held research positions at the Institute for Advanced Study at Princeton, Concordia University, and the Tata Institute of Fundamental Research. In 1987, he was appointed as Associate Professor at the Downtown campus of the University of Toronto, and in 1991 he was promoted to Full Professor. He was Chair of the Department of Mathematics at the University of Toronto Downtown campus during 2008-2013 and 2014-2017.

He has served on the Canadian Mathematical Society Board of Directors during 1995-1999 and was Vice President during 2009-2011. He was elected a Fellow of the Royal Society of Canada in 1995, Fields Institute Fellow in 2003, and Senior Fellow of Massey College in 2020. He received the Coxeter-James Prize in 1991 and the University of Toronto’s Inventor of the Year Award in 2011.

Professor Murty works in the areas of number theory, algebraic geometry and their applications to information technology. He has over 125 published articles in leading scholarly journals and and he has authored or edited 7 books. His recent work has expanded to mathematical modelling in social, economic and health contexts. This includes his work on Smart Villages, which received a Connaught Global Challenges Award in 2017, and his work on integrative modelling related to the pandemic. In particular, he heads the CIHR funded Mathematical Modelling of COVID-19 Task Force to undertake research relating to COVID-19. Representing the Fields Institute, in partnership with AARMS, CRM, and PIMS, and in collaboration with PHAC, VIDO-Intervac, and the NRC, the task force brings together Canadian mathematics institutes, national and international co-investigators, collaborators, and team members, to mobilize a network of infectious disease modellers to assess transmission risk, predict outbreak trajectories, and evaluate the effectiveness of COVID-19 countermeasures.