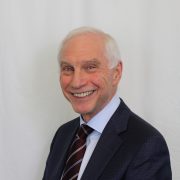 Brian Schwartz provides executive leadership for PHO’s public health science and population health programs including environmental and occupational health, health promotion, chronic disease and injury prevention, and research and ethics services.  Previous portfolios include health protection, emergency preparedness, communicable diseases and infection prevention and control.  Dr. Schwartz served as Scientific Advisor to the Emergency Management Branch of the Ministry of Heath and Long Term Care from 2004 to 2011, and was Public Health Ontario’s inaugural Chief of Emergency Management Support. He acted as Vice-chair of the Ontario SARS Scientific Advisory Committee in 2003 and was Chair of the Scientific Response Team for the 2009 H1N1 pandemic.

Before entering public health Dr. Schwartz practiced emergency medicine for over 30 years in community and academic settings.  He held the position of Director of the Sunnybrook Centre for Prehospital Care from 1996 to 2009, and has published extensively in emergency medicine, prehospital/paramedic care, and health emergency preparedness and response.  He has been a member of the Canadian Pandemic Influenza Plan Working Group since its inception.

Brian obtained his medical degree and Master of Science in Community Health from the University of Toronto and in 2012.  He received his certification in emergency medicine from and is a Fellow of the College of Family Physicians of Canada.