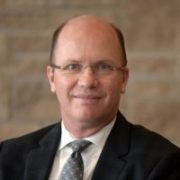 Dr. Stewart is currently President and CEO of St. Joseph’s Health System, and CEO of Niagara Health which combined make up one of Ontario’s largest health care systems/collaborations spanning 2 LHINS, academic and community-based care, as well as homecare, hospice care, supportive housing and long-term care. With over 15,000 employees, physicians, and volunteers, an operating budget nearing $1.5 B and 15 sites/organizations, Tom is privileged to lead a comprehensive health care network.

Immediately prior to this role Tom was the Chief of Staff and Executive Vice President, Niagara Health System as well as Chief of Staff at St. Joseph’s Healthcare Hamilton and Haldimand War Memorial Hospital. Prior to that he held a number of leadership roles including: Chief Clinical Officer (2010- 2013) at Mount Sinai Hospital; Physician-in-Chief (2009-2013) and, Director of Critical Care Medicine at Mount Sinai Hospital (1998-2009) and the University Health Network (2002-2009).

As an academic physician, he has received multiple honors, awards and grants and has published numerous peer-review articles and book chapters.

Dr. Stewart is also a committed family man, and has a wife and two children aged 23 and 20.